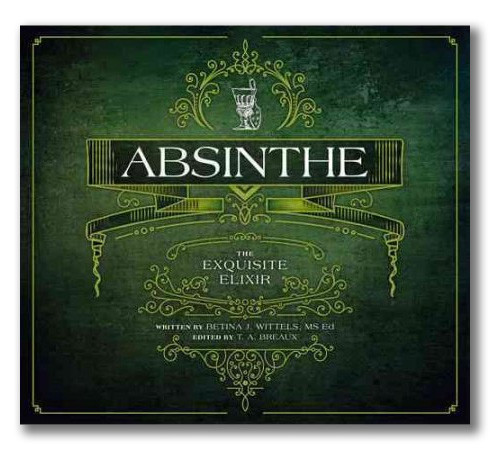 This is the long-awaited follow-up to Betina Wittels and T.A. Breaux's earlier works, Absinthe, Sip of Seduction, volumes I and II. The book takes an in-depth look into all aspects of absinthe. Chapters include absinthe's dark past, as well as its revival, with the recent lifting of the United States ban in 2007. The book features a wide variety of absinthe reviews of various absinthes from around the world, most of which are available for sale within the United States. There is also a chapter dedicated to cocktail recipes, all of which include absinthe as an ingredient.

Absinthe, The Exquisite Elixir is a visually rich voyage into absinthe's fascinating and thriving subculture. Loaded with colorful classic lithographs, posters, and cartoons, as well as numerous photos of antique tools of the absinthe drinker.

Wittels and Breaux create a unique perspective into the world of absinthe, each having been involved with the elixir for over two decades. Wittels, a licensed psychotherapist by trade, began collecting antique accoutrements and pre-ban absinthes at a time when most Americans knew little about the forbidden drink. Over years of countless visits to France, Spain and Switzerland on collecting trips, Wittels gathered a unique perspective into the world of the Green Fairy that most have never seen. Breaux creates a unique look into absinthe from a scientific point of view. Having reverse engineered many samples of antique absinthes, he has been able to reproduce pre-ban absinthes like no other. Passionate about absinthe since the 1990's, he is best known as the owner and distiller of Jade Liquors. His absinthes continue to be handmade by Breaux in the early 19th century Combier Distillery, located in Saumur, France. His absinthe is considered by many as the "Cadillac" of absinthes. Breaux has also been a tireless proponent of absinthe education throughout the U.S. and Europe.

About the Authors and Contributors

Betina J. Wittels, creator of the website www.allthingsabsinthe.com, was one of the first people to formally introduce absinthe antiques into the United States more than twenty years ago. Passionate for life, she is willing to turn over any boulder or slip into any barrio to uncover a rare spoon or a bottle of vintage absinthe.

T.A. "Ted" Breaux is a native New Orleanian and research scientist who has dedicated more than twenty years of research toward resolving the mysteries and myths associate with absinthe. His work led to the founding of Jade Liqueurs (www.jadeliqueurs.com), and the effort to lift the nearly 100-year ban of absinthe both in the United States and France. Since 2000, his work has been lauded throughout the media all over the world including numerous television appearances on the History Channel, Discovery Channel, CBS, MSNBC, Travel Channel, and PBS.

Maxwell Britten, co-founder of The Liquor Cabinet, Managing Partner of The Django NYC, and Former Bar Director of Maison Premiere

'Absinthe, The Cocaine of the 19th Century' Book