The Origins of Absinthe

Absinthe as we know it today, originated in the Swiss town of Couvet in 1789 by Dr. Pierre Ordinaire. Dr. Ordinaire, originally from the Franche-Comté region of France, went into self-exile after the French revolution due to political reasons. While traveling through the Val-de-Travers in Switzerland, the doctor allegedly found the plant grande wormwood (Artemisia absinthium). He began to combine this plant with other herbs and alcohol and began to distill the concoction. The distillate soon became well known in the region as a cure-all and for its unbelievable healing powers. Because of its greenish tint, it became known as La Fée Verte (The Green Fairy).

The History of Absinthe Distilling

Dr. Ordinaire supposedly passed his recipe on to two sisters named Henriod, also from Couvet. Although historical information suggests that the Henriod sisters were making the distilled elixir long before the Doctor arrived in the region, the doctor is still credited with being the one to first to promote La Fée Verte. The Henriod sisters took what the doctor was doing commercially and began selling their elixir to various pharmacies in the area. In 1797, the sisters sold their recipe for a nice profit to a Frenchman named Major Dubied. Later that same year, the Major's daughter married Henri-Louis Pernod. Pernod, who along with the Major and his son Marcellin, began to build the first commercial distillery to produce absinthe. And in 1798, the factory began producing absinthe under the name Dubied Père et Fils. 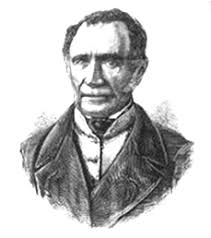 The Rise of French Absinthe

It was not long until absinthe began to catch on across the Doubs River in France. One problem the company soon faced was high taxes being placed on importing the liquor into France. The solution was to build another factory across the river in the small sleepy town of Pontarlier, France. So in 1805, a new, larger factory was formed under the name, Maison Pernod Fils. Pontarlier was the perfect solution, as it was not only located on a major waterway, it was also close to the train rail system, which allowed it to easily supply the rest of the country. When the factory opened it produced approximately 16 liters of absinthe a day. As absinthe gained in popularity, Pernod purchased a second, larger factory and began to produce more than 400 liters a day. As the want for absinthe continued to grow, so did the manufacturing. By the middle of the 1850s, the factory's production had grown to over 20,000 liters a day and at the height of their production, over 30,000 liters a day. Pernod Fils was the name synonymous with quality absinthe. They set the bar high in quality and innovation and every absinthe company inspired to imitate them. 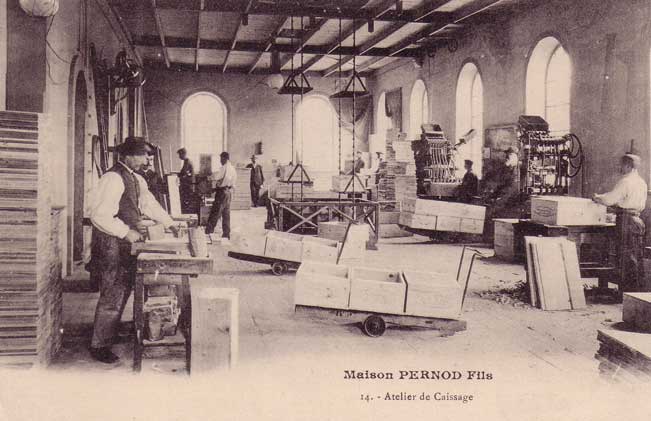 The first major contributor to absinthe's popularity in France was the Franco-Algerian War (1830-1847). While the soldiers were off fighting in North Africa, they given absinthe for what was believed would help purify water. Besides aiding in digestive problems, it was also used as an antiseptic for open wounds. Once the war ended, the soldiers who had acquired a taste and appetite for absinthe were sent back to France, triggering the first nationwide longing for a single product. Until then, France remained regionalized. Products consumed at that time (such as wine, cheese, etc.) were generally from within their localized region. For instance, it was rare for someone in the east of France to drink a wine from Bordeaux, from the west. Many distilleries began to take notice of this national craving and more absinthe factories began to spring up throughout France to quench this thirst. Most of these distilleries were found in the east of France around Pontarlier. By the end of the 1800s, 14 distilleries had sprung up in Pontarlier alone.

Another way that absinthe was gaining strength in popularity was from the vine eating insect, grape phylloxera. This insect single-handedly destroyed two-thirds of the vineyards on the continent of Europe. The wine industry was decimated. This insect, which feeds on grape roots, either stunts the growth of the vines or kills them, thus limiting the availability of wine. With the growing production of absinthe and the lack of availability of wine, absinthe soon became the most popular alcoholic drink in France. In the late 1800s France was drinking more absinthe than all other countries combined. It was said that due to the incredible amounts of absinthe being consumed in the evenings, the smell of anise filled the air of the streets of Paris.
By the end of the 19th century, absinthe was the favored cocktail of Paris, and crowds would gather at 5pm to imbibe in neighborhood bars and bistros. This time soon became known as the "green hour," or L'Heure Verte. Absinthe had developed into a very sociable drink and is said to be the first crossover drink where ladies were allowed to drink in the company of gentlemen. It was also thought to help women with their monthly issues.

The popularity of absinthe was not contained solely to France and Europe. It also found its way to the United States and more importantly, New Orleans. Absinthe was consumed in most large cities in the U.S., but it was never as popular as it was in la Nouvelle-Orléans because of the large population of French. With the high levels of absinthe being consumed in New Orleans, Europeans nicknamed the city "the little Paris of North America." The Old Absinthe House, located at 240 Bourbon Street was the city's most popular meeting place for absintheurs (one who drinks absinthe). The likes of Ernest Hemingway, Mark Twain, and Oscar Wilde have all enjoyed drinking absinthe at this historical bar. 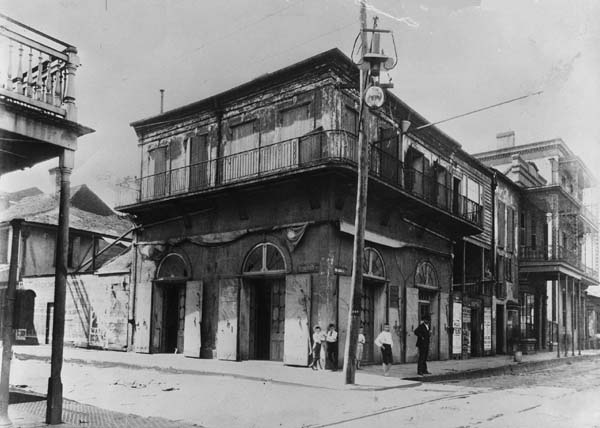 The Absinthe Ban Years in the United States

After the banning of absinthe in various countries in Europe (most importantly Switzerland in 1910, the birthplace of absinthe) the U.S. began keeping a close eye on absinthe in Europe. Finally, the U.S. banned absinthe in 1912. Many believe it was a dry run for what would soon become Prohibition. Since its banning (over 95 years ago) absinthe has become the most misunderstood and controversial drink in history. With the legalization of absinthe in the U.S. in May 2007, we are now able to enjoy absinthe in its traditional form using the same standards employed over a century ago.
×