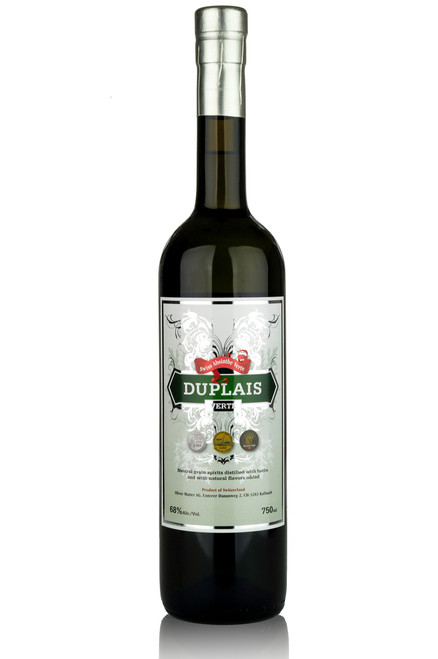 Duplais Swiss Absinthe Verte (136 proof / 68% ABV) is made in the Matter-Luginbuhl Distillery located in the Bernese Seeland region of Switzerland. The region borders the canton of Neuchâtel, the birthplace of absinthe. The distillery dates back to 1920 where is was known for its brandy. It now produces arguably some of the best absinthes in Europe. The factory is run by 4th generation company owner Oliver Matter.

Duplais Verte was first introduced to the European market in July 2005 and has the distinction of being the first 'verte' (green colored) absinthe to be released in Switzerland since the 1910 ban was lifted in 2005. Duplais' recipe is based directly on the highest quality absinthe 'Suisse' protocols from the important 19th century French distiller's manual: "Traité des Liqueurs et de la Distillation des Alcools" by P. Duplais - which is where it takes its name. Duplais uses grand wormwood and other botanicals which are locally grown on a Swiss plantation reserved exclusively for the finest pharmaceutical-grade herbs. The distillate is reduced to final strength using spring water from the Alps. This absinthe has been considered for experienced 'connoisseur's' who wish to partake and appreciate Duplais on its own in a traditional absinthe 'drip', but has also been incorporated in some fantastic cocktails, such as Erik Adkins' Pan American Clipper.

Tasting Notes:
Unique, golden/green hue. Slow forming louche with the addition of ice-water that develops suddenly into a thick milky finish with rich, golden green highlights. Wormwood and fennel develop on the nose with hints of coriander spice lifting above the meld of herbs. Full textured, rich, creamy mouth-feel with refreshing taste, substantial and complex aromas with marked fennel, coriander and wormwood notes and a long finish.