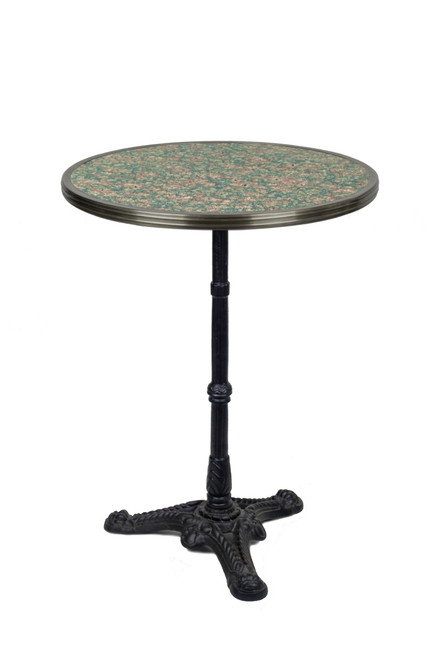 Finally, affordable bistro tables are now available in the United States. Originally made popular during Paris' Belle Époque, bistro tables such as these, continue to be used in restaurants and bistros throughout France and other parts of Europe. These solid marble top and cast iron base tables are constructed in the same manner as they were over 100 years ago.

Each table features an antiqued, seamless brass band which encompasses the rim of the granite. The cast iron, three legged base features the same detail taken from an original early 20th century French bistro table. All construction has been faithfully reproduced, including the way the granite is a fixed to the table. It features 3 heavy duty steel prongs used under the table top to hold the granite to the base. The cast iron base and stem are held together by a large screw underneath the base. Brass band has been tarnished to give an antiqued appearance.

The tables are suitable for indoor or outdoor use. If used outside, additional tarnishing may occur to the brass band.