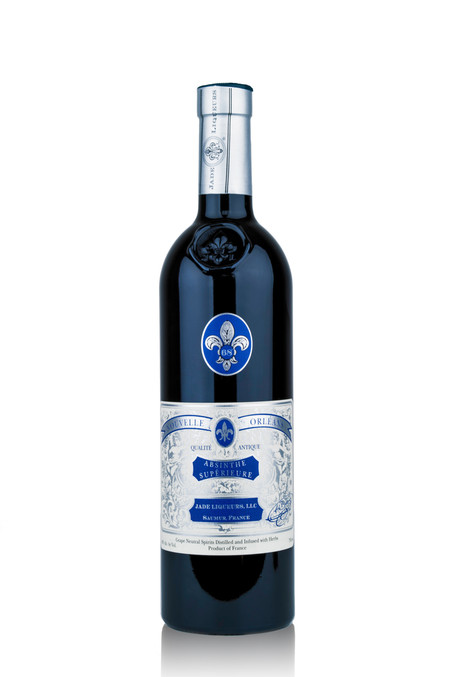 Jade Nouvelle-Orléans Absinthe Supérieure (136 proof / 68% ABV) is made in the 180-year-old Combier Distillery located in Saumur, France. The recipe was developed by Jade Liqueurs owner and distiller T.A. “Ted” Breaux. Breaux, a New Orleans, Louisiana native, who is considered one of the very best absinthe distillers in the world, producing his famous Jade’s.

As the popularity of absinthe swept through France during the mid 19th century, la fée verte began making her way over to the 'Paris' of the New World, La Nouvelle-Orléans (New Orleans). French-speaking travelers and immigrants alike carried their taste for absinthe to this vibrant port city, and before long, French apothecary Antoine Peychaud was doling out 'healthy' absinthe-laced elixirs from his Royal St. shop. The popularity of absinthe surged in French-speaking Louisiana, and when Henri Degas and Oscar Wilde arrived in New Orleans in the latter part of the 1800s, they had no trouble finding imported French and Swiss absinthes among familiar comforts. By the advent of the 20th century, cafés like the famous Old Absinthe House were making a name for themselves by cooling the humid summers with sazeracs, absinthe frappés, and even the occasional absinthe crème de glace. Unfortunately, it all came to a halt with the U.S. ban on absinthe in 1912 ... or did it?

This exquisite absinthe represents the inspired work of Breaux, and its heritage is rooted in the original absinthes that made the sazerac cocktail and absinthe frappé famous (both New Orleans classics). Its unique distillation of stimulating herbes toniques is just what the Belle Époque chimistes prescribed for various subtropical ailments. The light, stimulating mouthfeel and delectable floral finish of Nouvelle-Orléans Absinthe Supérieure present the connoisseur with a unique perfume and texture that disappeared along with the artisanal marques almost a century ago. We invite you to see why we truly consider Nouvelle-Orléans Absinthe Supérieure to be L'Esprit du Vieux Carré