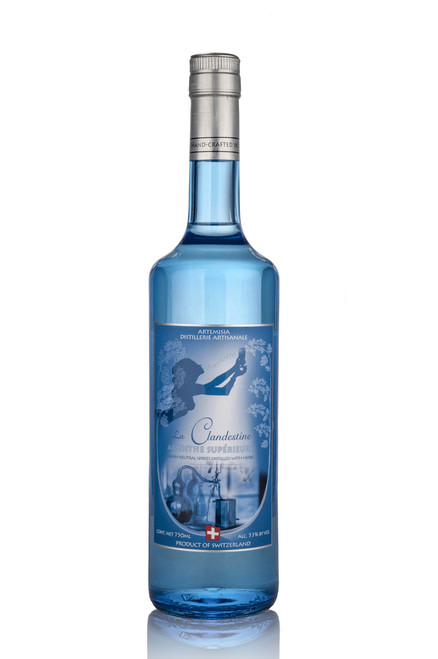 La Clandestine Absinthe Supérieure (106 proof / 53% ABV) About two hundred years after the first birth of absinthe, Claude-Alain Bugnon, who had been born in the region but who had worked in the oil business, first became interested in the drinks enjoyed over generations by his ancestors. Like many families in the region, he started to make his "clandestine" absinthe at home, fighting for space in the laundry with his wife.

Beginning in 2000, he started to gain a reputation that spread beyond Switzerland. Using a recipe that dated back to 1935, he developed a new absinthe that he dedicated to its creator, Charlotte. Americans discovered his "Clandestine La Bleue" (or CLB as some called it) through various .... "channels of distribution." And then in 2005, as absinthe developed throughout the world, Claude-Alain became the first distiller in the town where absinthe had been born, to "go legal."

Since 2005, Claude-Alain's absinthe has become popular with absinthe lovers in Europe, North America and Asia. As it comes to the USA through more normal channels of distribution, some have asked whether, now that it is legal, it is now really "Clandestine." By keeping its traditional name, it honours those who kept La Fée Verte alive in Switzerland during the twentieth century and welcomes a new generation of drinkers.

How is La Clandestine different from most other absinthes? It is, in fact, the ONLY absinthe hand-crafted in the village where absinthe was first born. Every stage of the process used to distill and bottle La Clandestine is hand-crafted. Choosing the best plants, distilling each small batch, bottling and labelling.

"Hand-crafted in the birthplace of absinthe," La Clandestine need no longer be a secret pleasure!