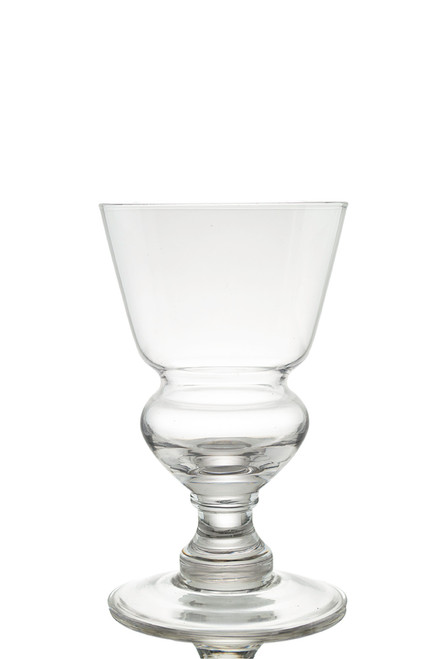 ALL FOUR (4) OF THESE GLASSES HAVE MINOR DEFECTS OR IMPERFECTIONS AND ARE BEING SOLD AS SUCH. THE IMPERFECTIONS COULD INCLUDE SMALL SCRATCHES, UNEVEN RIM (MOUTH), OR NON-PROPORTIONAL DOSE RESERVOIR, AMONG OTHER MINOR ISSUES. THE STATE OF GLASSES SHOWN IN THE PHOTO ABOVE MAY NOT BE REPRESENTATIVE OF THE QUALITY OF GLASSES PURCHASED.BECAUSE EACH GLASS IS MOUTH-BLOWN, THERE ARE SOMETIMES ERRORS MADE IN THE FACTORY. THESE PROBLEMS OCCASIONALLY CREATE GLASSES THAT CANNOT BE SOLD AS A-STOCK OR IN PERFECT CONDITION.

This popular glass, this mouth blown piece is an exact replica of the legendary Pontarlier Absinthe Glass, but without the facet cuts. Originally named after the glass first appeared in a late 19th century advertisement for the absinthe producer Pernod Fils, which featured its hometown newspaper from Pontarlier, France (see photo). The small, sleepy town of Pontarlier was once the largest maker of absinthe in the world and home to who where considered the best absinthe makers in the world. Pernod Fils, thought to be the best of the best, was the first to take up production there.

The glass is made in the same proportions as an original piece, including the reservoir. The reservoir is where is absinthe is poured and measured. Reservoirs in absinthe glasses tend to vary greatly depending on the size of the glass. As an absinthe is made to one's taste, the ratio of absinthe to water generally ranges from 1 part absinthe to 3 - 5 parts water.

The glasses are NON-REFUNDABLE.