Why Was Absinthe Banned

There were three major contributing factors that led to the banning of absinthe. The first and perhaps the most important was the inferior absinthes being sold in the pre-ban era (before 1915). Because of the popularity of absinthe at this time, there were many counterfeit companies producing substandard absinthes, many of which were not distilled at all. Some of these imitation absinthes actually contained poisons, like the toxic metal, copper sulfate. One way these imitators were able to give the liquor its characteristic green coloring was to use copper sulfate. This is considered the single most devastating factor to the downfall of absinthe.

The Insect That Ruined Absinthe

The second contributing cause was a tiny insect. During the 1860s and '70s, an insect called grape phylloxera destroyed two-thirds of the vineyards on the continent of Europe. The wine industry was decimated in what was known as the Great French Wine Blight. It was at this time when absinthe was able to surpass wine as the number one drink in France. In the 1880's, France alone was drinking more absinthe than all other countries in the world combined. At the end of the 1880s the wine industry was beginning to make a comeback and the only thing standing in its way was absinthe. Wine in France was not considered alcohol, but a way of life so it was very easy for the wine industry to begin their crusade to convince the government that absinthe was evil. It was there powerful wine lobbyists that were soon over the shoulders of public officials influencing their opinion as to the need to outlaw absinthe.

And lastly, public opinion. At this time, alcohol was being blamed for all social immortals which would soon lead to the temperance movement and the eventual banning of all alcohol in the United States. In 1905, Jean Lanfray (a Swiss laborer) in a drunken rage, murdered his family and then tried to commit suicide, only to miss and shoot himself in the jaw. It was later revealed that throughout the day he had consumed; two glasses of absinthe, seven glasses of wine, six glasses of Cognac, one coffee laced with Brandy and two crème de menthes. After all the alcohol he had drunken, it was the 2 ounces of absinthe that was blamed for his actions. But due to the moral panic against absinthe in Europe at this time, the murders lead to a petition receiving over 82,000 signatures and the eventual banning of absinthe in Switzerland in 1910. And after carefully watching what was happening in Europe, the United States soon followed in 1912, and reluctantly, France in 1915. 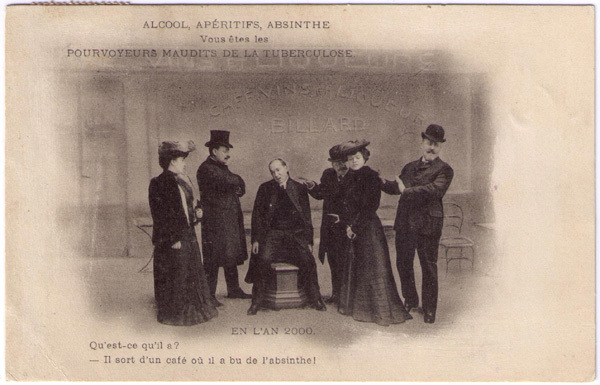 Absinthe remained banned for many years in both Europe and the United States and was only lifted in the United States in 2007. Today, we can enjoy it at our leisure, though there are still a number of laws and regulations surrounding it.