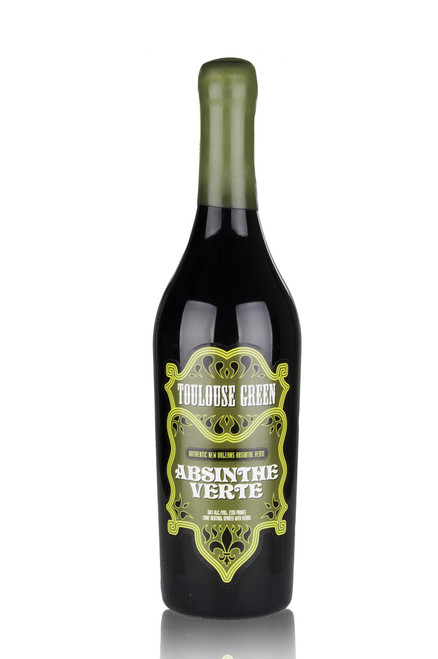 Toulouse Green Absinthe (136 proof / 68% ABV) is made in the Atelier Vie Distillery located in New Orleans, Louisiana, just outside the world famous French Quarter. The absinthe is traditionally distilled based on a late 20th century recipe. The green Absinthe is pot distilled with natural herbs and with no artificial ingredients, colors, or flavors. The Grande Wormwood (Artemisia absinthium), which without this key ingredient the spirit is not absinthe, is locally grown and harvested, just outside of the city.

A side note - Toulouse Green is made from a sugarcane neutral base, opposed to a traditional neutral grain base. It is possible that the original New Orleans absinthe distilleries in the late 1800's could have also made their bases the same way.

As the producer has recently changed the packaging (see photos), your purchase would include one of the two bottles above.

"A relative newcomer to the absinthe scene, this one is produced right in the heart of New Orleans.  The color is light, as if the producers didn’t want to go overboard on coloring.  Aroma is also correspondingly light and refreshing.  You wouldn’t expect such a light absinthe to have much of a louche, but you’d be wrong.  It’s wonderful!  Thick white end product with hints of green and yellow dancing around.  Very creamy mouthfeel with lots of well-balanced anise sweetness.  The wormwood and coloring herbs present themselves next, with a nice touch of bitterness and mint.  The cane base definitely asserts itself in the aroma and on the back palate, adding an interesting touch to an otherwise traditionally made brand.  Good to see the Big Easy representing itself well."