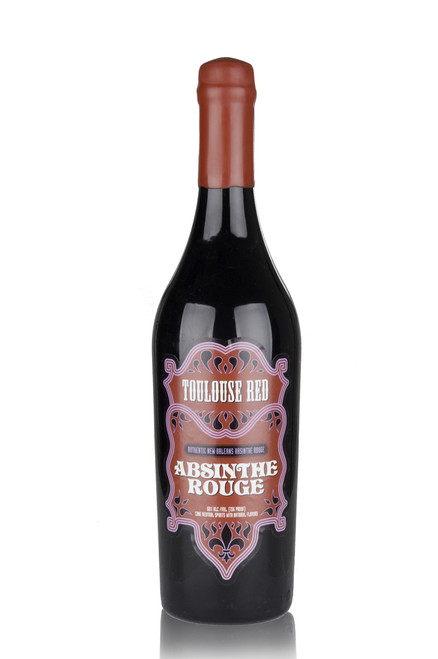 Toulouse Red Absinthe (136 proof / /68% ABV) is made in the Atelier Vie Distillery located in New Orleans, Louisiana, just outside the world famous French Quarter. The Toulouse Red absinthe uses all natural herbs, most notably Hybiscus which gives it its red coloring. Historically, red absinthe was considered rare in the pre-ban era (before 1915), however, there are documented cases of Absinthe Rouge. The absinthe is traditionally distilled and based on a late 20th century French recipe. Atelier Vie uses no artificial ingredients in their distillation process. The Grande Wormwood (Artemisia absinthium), which without this key ingredient the spirit is not absinthe, is locally grown and harvested, just outside of the city.

A side note - Toulouse Red is made from a sugarcane neutral spirit base, opposed to a traditional neutral grain base. It is possible that the original New Orleans absinthe distilleries in the late 1800's could have also made their bases in the same manor.

"Toulouse Red is a contender as one of the more popular rouges on the market.  Aromas of hibiscus and citrus on the nose.  Very light and refreshing.  Flavor is that of a fairly traditional absinthe with sweet anise and minty wormwood at the forefront.  The coloring herbs add a noticeable citrus punch on the mid-palate.  Finish is long with a full mouthfeel.  If you’re looking for a traditional rouge, this is right up there."