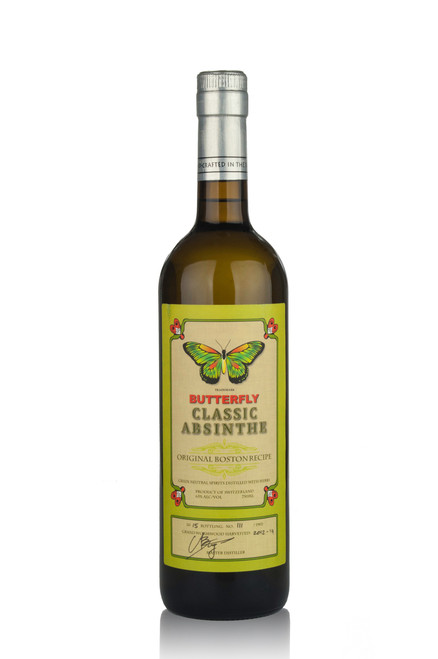 Butterfly absinthe is a modern rendition of a classic pre-prohibition absinthe produced in Boston in the early 1900s. America was ripe with domestically produced absinthe prior to prohibition.  The absinthe Americans created was unique in style and different from what was imported from Europe. Pre-Prohibition American absinthe made liberal use of the herbs growing in the Midwest and New England. Fields of wormwood were scattered across the country and yielded so much of the famed herb that it was exported to Europe. The style stands out from other classic absinthes by its use of mint, citrus zest and other herbs creating a complex but refreshing flavor profile.

Claude-Alain Bugnon, of La Clandestine fame, was approached to see if he was interested in the project. Claude-Alain was intrigued by the idea of Butterfly and agreed to create a distillers proof from Dempsey’s recipe. From there, Butterfly went into commercial production with a release date in the summer of 2010.

"The flavor is as intriguing as the aroma! The anise lends a very noticeable sweetness on the soft palate, while the wormwood helps to dry things out slightly in the back of the throat. There's a nice level of herbal spiciness as well, with hints of mint, genepy, licorice, and earth. Quite good. The aroma Lots going on here. Anise, hints of wormwood, mint, rootbeer, orange peels, and confectioners’ sugar. Intriguing.  The anise is room filling. Lots of anise creates a thick and milky final product. Hues of yellow and white dance around in the glass. Sweet with just a touch of mint. It lingers nicely, while the anise. Extra Virgin Olive Oil with yellow tinges. Inviting. This is a very well made and tasty verte. It's great to see it hit the U.S. shores."